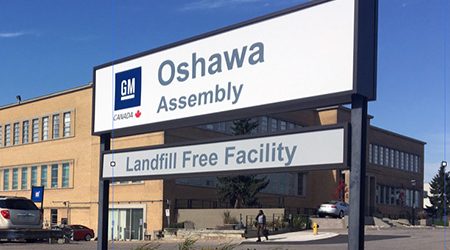 GM announced plans in mid-2017 to use its Oshawa Assembly Plant for additional production of the Chevrolet Silverado and GMC Sierra pickups. The changeover marks the return of truck production to Oshawa after nearly a decade and makes the Oshawa plant the first in North America capable of building both cars and trucks. A flex line builds the Buick Regal, Cadillac XTS and Chevrolet Impala although production of the Regal is expected to end at the plant in the fall. The cost of the entire project was roughly $500 million CDN.

Mid South Contractors was awarded the contract for the electrical work for the project including power for the lines and equipment and demolition of the Chevrolet Equinox line that was replaced. The project filled two separate buildings on site –  one for chassis and one for assembly. There were many challenges associated with the project due to the accelerated six-month timeframe in which all of the work – including the demo, was to be completed. There were also many changes made to the original plans that had to be addressed “on the fly” further complicating the project. Even so, schedules and build targets were met. This was the fastest launch that GM has ever successfully attempted and completed.

The customer was so pleased that on March 1, Rob Grondin received the following note from General Motors:

As we wrap up the T&E installation in Oshawa for the K2XX program, I wanted you to know that I appreciated all the hard work you and your crew put in from an electrical standpoint.

As I’m sure you are aware, the work nearly doubled and the changes required were presented at a very demanding pace. Your pull-ahead work ethic and quick adaptation to revisions help to ensure our overall project success.

It was a pleasure working with you, Kevin, Paul, and the rest of your team. I wish you much success in your future endeavors.